The meteoblue Climate Prediction provides an understanding about the arising risks of climate change for any specific location on earth. It shows the past and most likely future development of more than 20 variables, including air temperature, precipitation amount and wind speed.

Nowadays, many regions worldwide cope with challenges such as extreme air temperatures, storm events, and heavy precipitation. In the future, these problems will occur more often due to climate change. This trend will result in an unknown amount of economic damage and endanger the life and health of the population. In many parts of the world, heatwaves presently kill more people than any other natural hazard, and there is a strong observable tendency for this phenomenon to increase.

Climatic patterns of temperature, rainfall, wind, and irradiation are changing, driven by increased levels of CO$_2$ in the atmosphere. Some regions of the world are affected more by climate change (e.g. Arctic region), others less (tropical regions). Changes in meteorological parameters are described by climate change scenarios in reports published by IPCC. These scenarios are plausible projections of the future climate with an associated uncertainty range. Climate change scenarios typically use climate projections based on different projected greenhouse gas emissions and other factors such as future population levels, economic activity, etc. They span a wide range of possible future developments.

Organisations need to consider the impact of climate change on both their strategic plans and their daily operations. Due to the inherent uncertainty of climate change scenarios organisations must anticipate and manage their exposure to climate-related risks. meteoblue weather and climate data and services support these processes with high quality data including uncertainty information.

Data are delivered in form of csv/json files and png images. Several different configuration options can be chosen below. Reports will be delivered on request.

Note, that the analysis is based on the ERA5 grid cell (30 x 30 km) in which the selected coordinate is located.

Note that daily aggregations for climate change scenarios are not offered, caused by the monthly temporal resolution of the most variables.

The following figures and graphs are available for each pixel worldwide by combining ERA5 historical data with the climate projections of the different emission scenarios, exemplarily shown for London, Great Britain. 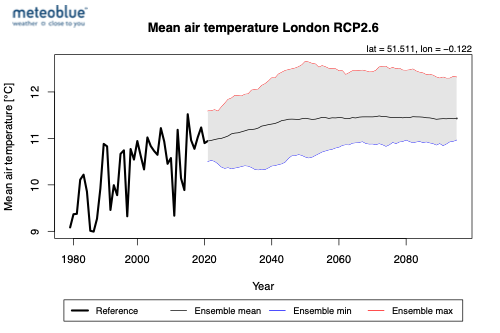 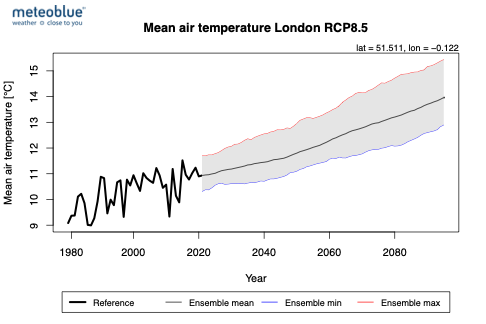 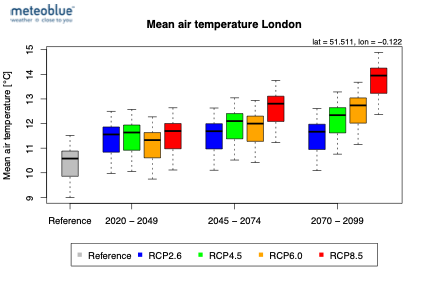 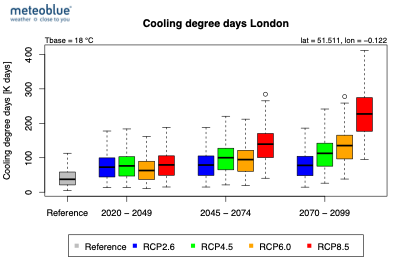 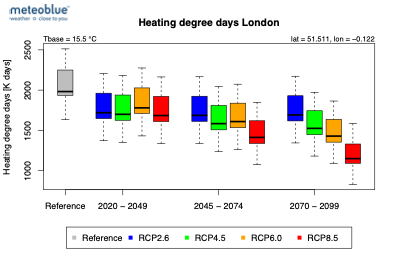 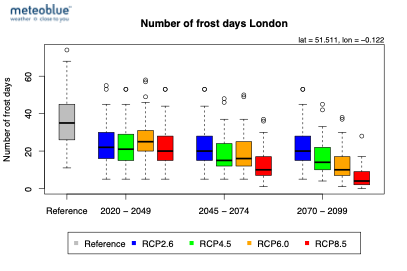 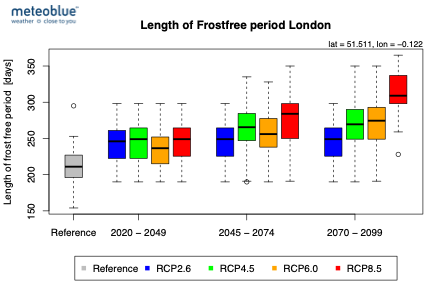 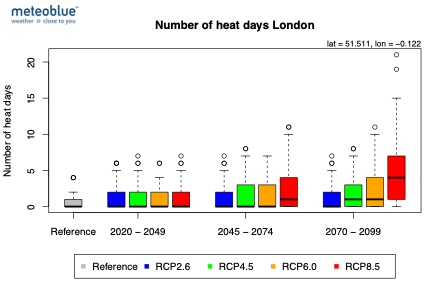 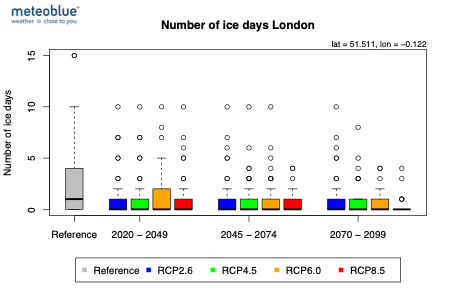 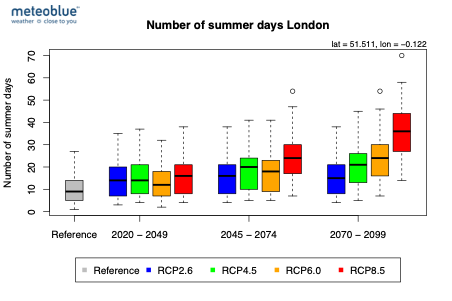 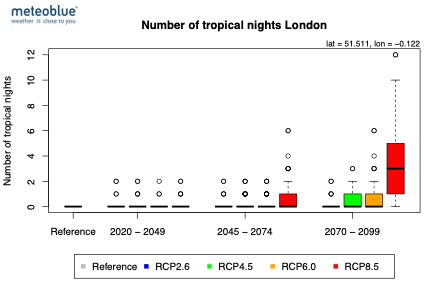 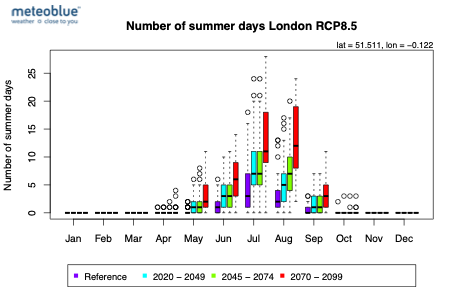 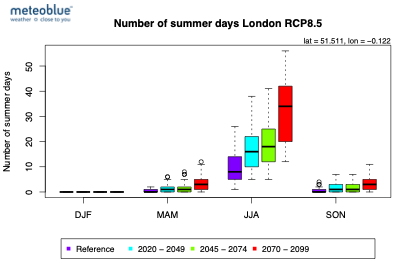 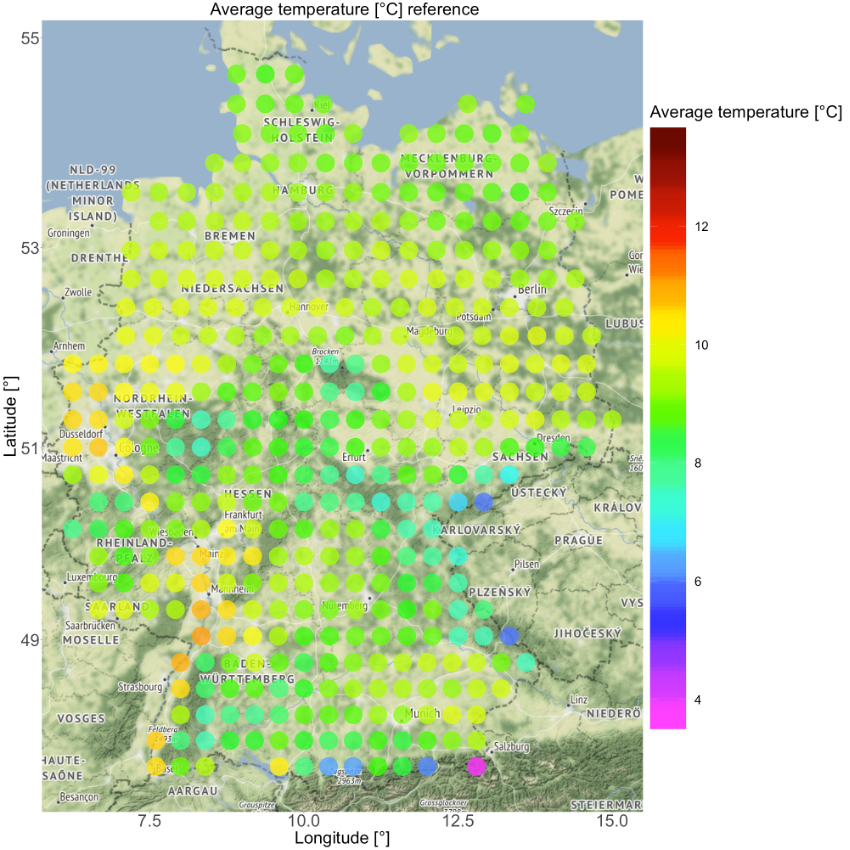 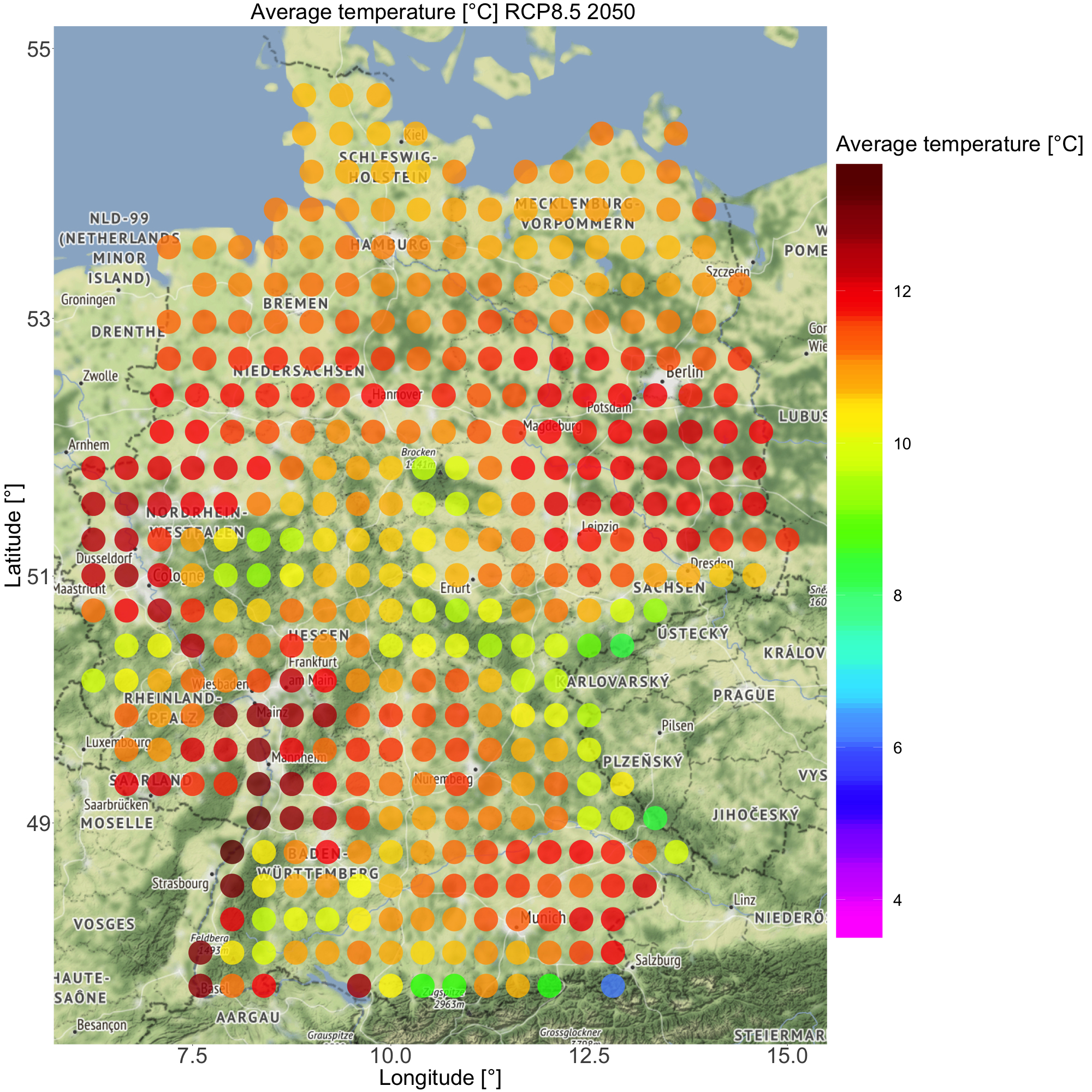 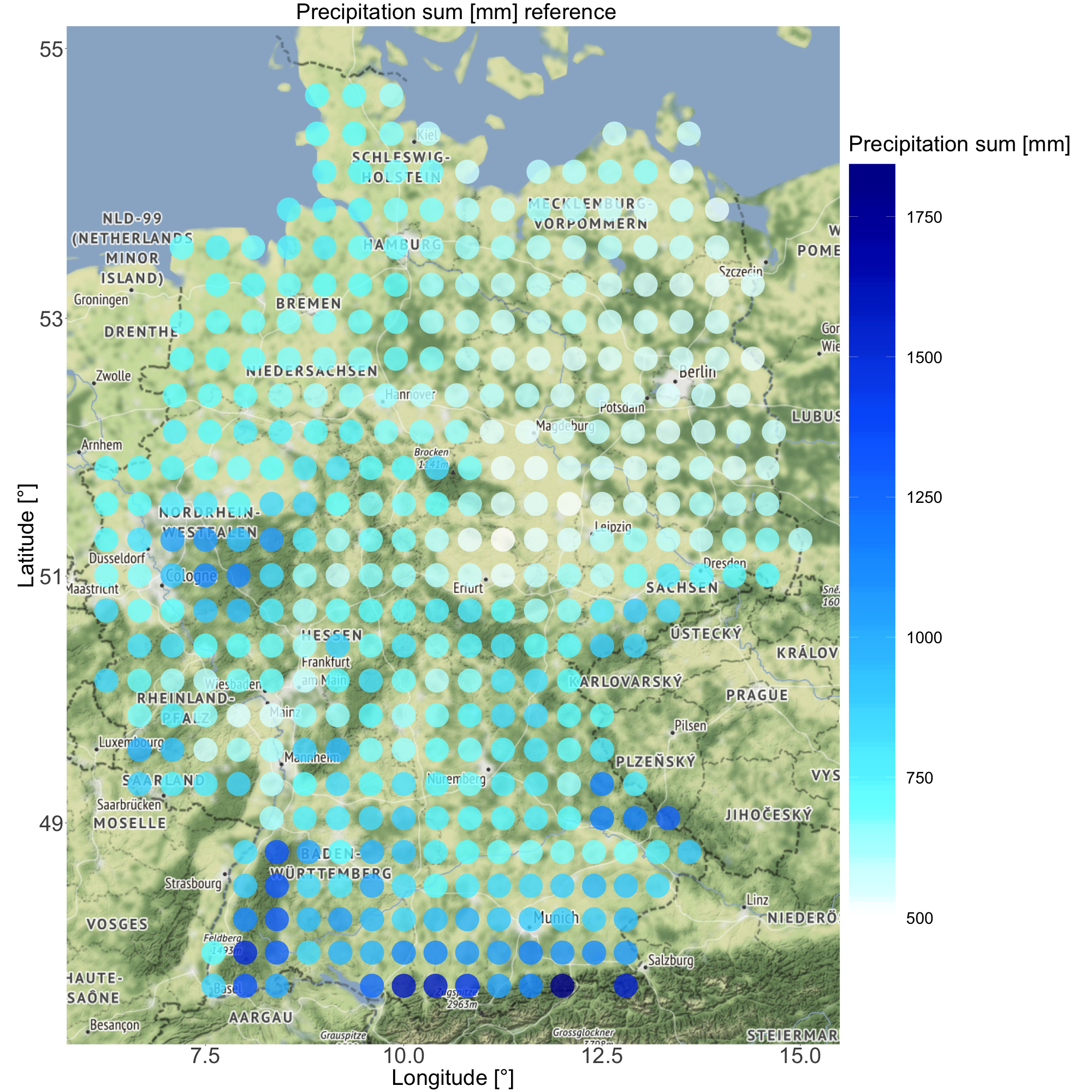 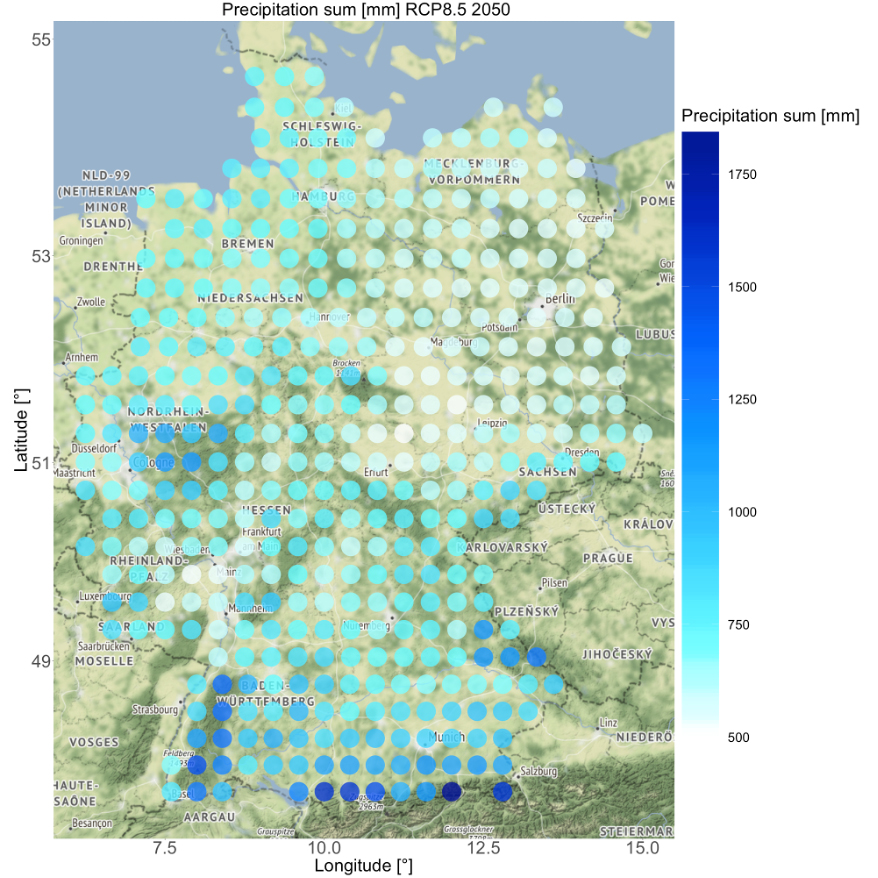 Within the variable folder the following files are stored:

An example of the yearly_Basel_heat_days.csv file can be downloaded here.

The number of rows within the file is defined by the number of chosen years in the reference period. In case of choosing the default reference period between 1979 and 2019, the file contains 41 rows, each row representing one year. The emission scenarios and time horizons are represented in the columns of the file (e.g. reference, RCP2.6 2035, RCP8.5 2085).

Within the yearly folder the following files are stored:

Within the variable folder the following files are stored

An example of the seasonal_RCP85_Basel_heat_days.csv file can be downloaded here.

Within the variable folder the following files are stored

An example of the monthly_RCP85_Basel_heat_days.csv file can be downloaded here.

Representative Concentration Pathways (RCPs) published by IPCC lead to global climate scenarios, each representing an assumed radiative forcing in the year 2100. There are four different RCPs (RCP2.6, RCP4.5, RCP6.0 and RCP8.5) which describe different scenarios based on different radiative forcing. The RCP8.5 scenario, for example, describes a temperature increase of 4.8 degrees Celsius by 2100 compared to the pre-industrial conditions with the assumption of a radiative forcing of 8.5 W/m$^2$. RCP data were obtained from the fifth phase of the Coupled Model Intercomparison Project (CMIP5).

In this framework a large number of monthly climate projections on single levels were computed based on different experiments, models, members and time periods. CMIP5 data are used extensively in the Intergovernmental Panel on Climate Change Assessment Reports (the latest one is IPCC AR5, which was published in 2014). 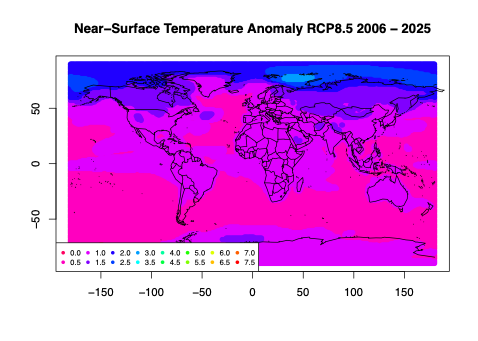 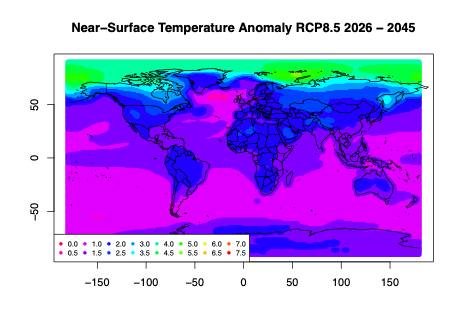 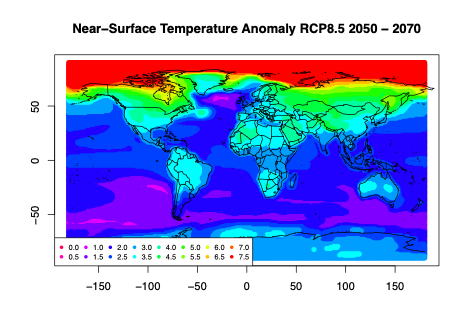 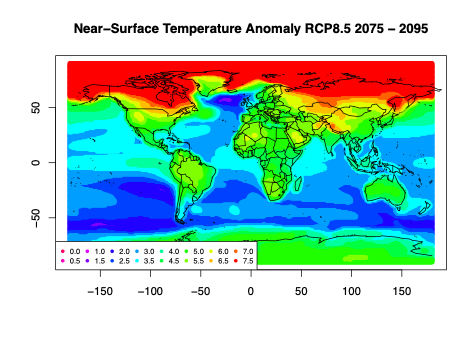 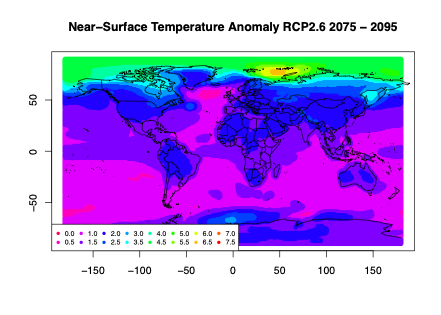 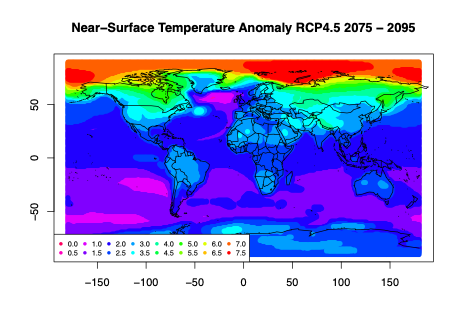 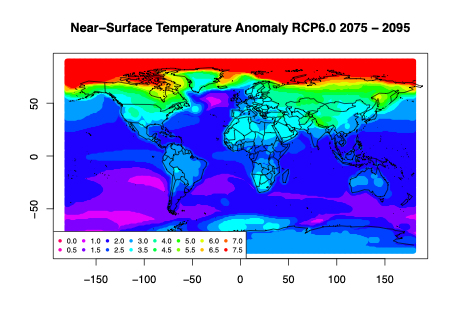 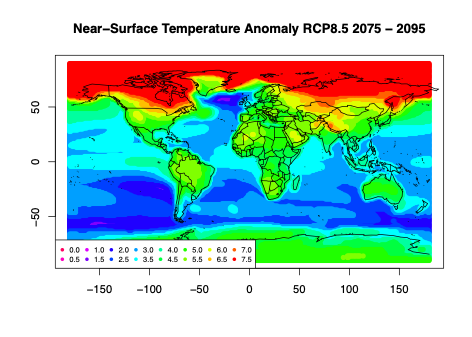 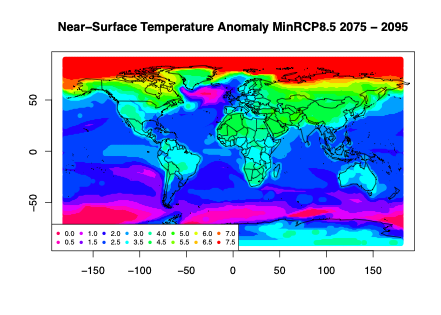 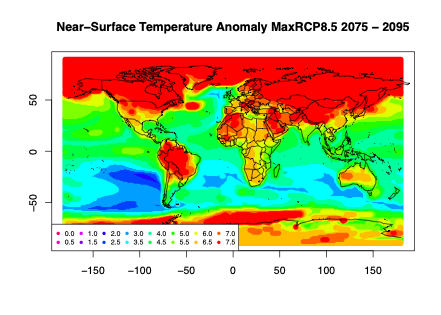 Depending on the chosen parameter up to 10 different member ensembles of each RCP scenario are available. For the near-surface air temperature e.g. the following member ensembles are calculated: canesm2, ccsm4, cesm1-cam5, cnrm-cm5, gfdl-cm3, hadgem2-es, miroc5, mpi-esm-mr, mri-cgcm3.

Each emission scenario is based on a baseline (reference) simulation (1850 – 2006) and a future simulation (2005 – 2099). Baseline simulation over more than 150 years are averaged over the entire baseline time period and climate change variables are calculated as follows:

where Var(fut) is the variable in a future scenario, Var(ref) is the time series of the ERA5 dataset from 1979 – 2019 and ∆Var is the change in the variable for different future years and emission scenarios.